“Sanxia” project is very important project in China, the big show on water of “Sanxia Coming Back” will be showed in Chongqing Baidi City where is poem called “ With apes sounding, the boats through the mountains”.

Fengjie county of Chongqing is “Poem City of China” where is with splendid civilization of 2300 ages. It was named with “ Throat of East north four roads, blouse of Wuchu thousands lands”. As the main city and front of Chongqing culture and travel, the team of “Sanxia Coming Back” shouldered important task and would make an enduring work that is “ first in China, only in world”. The total show will last 60 minutes, based on high technology, soul in poem, body in mountain and river, making a poem world through poem creating conception. Customized power by Powerange assured successful performance. The show chosen ten poems of Libai,Dufu,Liuyuxi,Sushi and so on. The background of poem and poem conception showed to audience by each poem, each chapter. The audience will get beautiful landscape of Changjiang river Sanxia and unique local customs of Bashu as well as strong culture heritage of “Poem City-Fengjie”. The grand view of “ There will be poem when coming to Sanxia” will be showed again, which should be first in history. 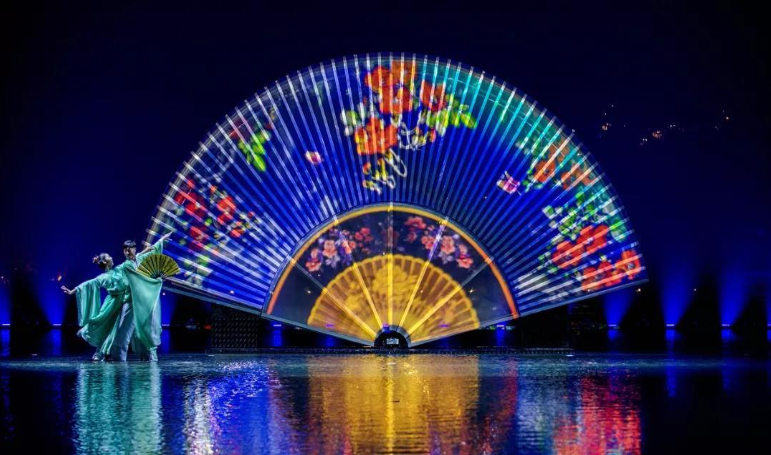 In order to achieve performance results, the show and audience seats will be all on pontoon.

More difficulties will be added as different traditional performance and natural circumstances. Finally they chosen the piece scenery changing as mainly scene show hanging on 63 pieces scenery through 2D WIA. They regard 63 pieces scenery and handling props as overshadow medium by lights changing according to different poem conception based on background of natural scene of Baidi City presented Chinese landscape painting art atmospheric and Poem elegant of Tang and Song dynasty.

Powerange charged each prop power supplying, any problem happened in performance is not allowed. Also it has special required, i.e. battery need to be  waterproof, it is huge challenge to battery, as you know, battery will be circuit upon touching water. Then we changed the case of battery before put in the prop, also adopted special technical to connection and terminal, so that our power reached the waterproof class- IP68. The performance get successfully in each show. we-Powerange get another progress in customizing power.